How do I Invite my Accountant to my Xero Account?

There is no disputing it, cloud bookkeeping packages, such as Xero, have revolutionized the business owner to accountant relationship.

Gone are the days when business owners had no option but to use pen and paper, spreadsheets or clunky desktop bookkeeping software packages.

Take the most advanced of those three older systems, desktop bookkeeping software. In order for your accountant to prepare your year end accounts and tax returns, they would need to ensure that they had the same software installed on their own machine(s).

The accountant would need you to take a backup of the software’s data, probably copying it onto a physical USB stick which you would have to post out to, or pass over in person to the accountant.

The accountant would then pray that their version of the software was at least as up to date as your version – to ensure data compatibility. If not, they would probably have to come to your premises to export or print off the reports that they needed to get the job done – secretly hoping that they don’t forget to get something – making them appear unprofessional and apologetic for wasting your time (and theirs). Of course, you, the business owner, would probably be paying for this extra work that was not budgeted for.

You would probably hear the accountant remind you not to make any changes on your own instance of the software until they had finished the accounts and tax returns (as any changes you made would be overwritten when you restored the ‘live’ data backup). This meant that your bookkeeping was getting out of date by the day – with the process taking weeks or even months.

Or worse still, your accountant would forget to remind you not to make changes – resulting in the need to key in all of that lost data again (and a whole world of hassle!) when your accountant passed the “live” copy of the data back to you.

As a result, the nature of the accounting software itself was sometimes to blame for the worsening of the client-accountant relationship. Nothing to do with the ability of the accountant to process a set of accounts and tax return.

Fast forward to today. All of the above issues have been pretty much eradicated through the introduction of cloud bookkeeping software over the past decade.

In Xero, the accountant’s only slight concern now is remembering to click a button to set the “lock date” correctly – in order to prevent the business owner from making changes to the financial statement period that the accountant is currently working on, without discussing the changes first.

We’re not going to go in depth into the pros and cons of cloud accounting software versus other methods during this article. However, I think that the following sentence sums up the main benefits of using a cloud package like Xero over other types of system…

Faster, Anywhere, Any Time, by Anyone (with authority!).

If you do your own bookkeeping on Xero, then your accountant will need access to that bookkeeping data in order to use it as a basis for forming your year end accounts, tax returns, VAT returns, management accounts etc.

Basically, if you want your accountant to prepare a report for you, then they will need access to your bookkeeping system. The alternative is for them to duplicate the bookkeeping process themselves – resulting in a much higher bill for you as business owner.

Can I just email Xero reports to my accountant instead?

You could do – but you would not be maximizing the benefits that Xero provides to the business owner and their accountant.

Your accountant could email you with a long list of reports they would need to prepare the accounts (a lot slower), such as:

But if you are going to go down this route, why not go back to the good old days and print the reports off and walk them around to your accountant?

You see, the bottom line is that accountants who are Xero partners generally know Xero inside out. It is the bread and butter of their working day.

Accountants know where to look for the data they need in Xero, and they know how to do it quickly.

If they have a query with a particular transaction they can find it in a matter of seconds – all without trawling through your paper or PDF report and without needing to trouble you.

Letting your accountant access your Xero account directly will keep them working efficiently and it will significantly cut down the amount of time that you are  spending answering their queries.

Is letting my accountant have access to Xero safe and secure?

Of course, any software system comes with it’s risks.

However, Xero have spent a lot of time developing features which minimize the risk of unauthorized entry to your account. Here are a couple of examples:

Firstly, the Xero account owner (or another authorized individual) can choose the level of access rights that each other user has. For example, generally, your accountant won’t need the ability to change the bank account details of your customers and suppliers (that may be stored in your Xero account).

It is important that all users, not just your accountant, have access to only the features that they require.

Secondly, Xero give users the option of implementing Two-Factor-Authentication (2FA), which means that as well as using their email address and password combination to log in, they must also authenticate using other means – in this case an authentication app.

You can find more details about setting 2FA up in Xero here.

If you are worried about granting access to your Xero account to your accountant, then it will be worthwhile talking to them (as well as talking to Xero support team) in order to alleviate any of your worries.

How to Invite your Accountant to your Xero Account?

Here is our quick tutorial which will show you exactly how to add your accountant to your Xero account so that they can interact with your data.

Here at Xenon Connect, we’ve created a walk-through video, with the same 9 step screenshot tutorial showing the process below for your convenience.

Here are the steps involved to invite your accountant to Xero...

Step 1 – Click the Organisation Menu at the top of the page. 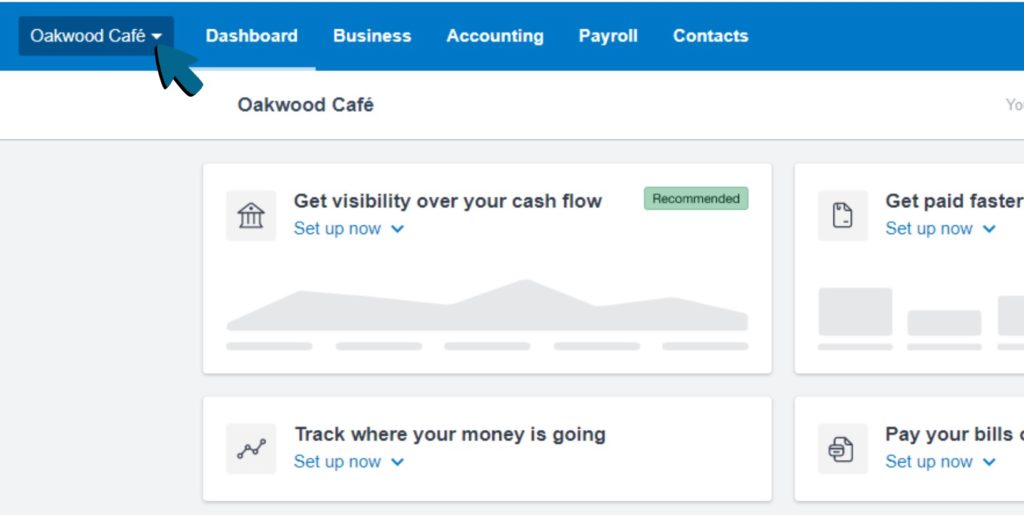 Step 4 – Click the Green ‘Invite a user’ button found at the right of the page.

Step 5 – Fill in the name and email address of your accountant in the provided fields.

Step 6 – Select the features you’d like to give your accountant access to. Choosing ‘Business and Adviser’ and selecting the ‘Adviser’ option is recommended, as this is usually sufficient for an accountant.

Step 7 – Choose any additional settings that that you’d like to apply, such as whether your accountant should be able to file VAT returns or manage users.

Step 8 (optional) – You can attach a message to your invite by clicking the ‘Add a personal message’ button.

Step 9 – Click the ‘Send invite’ button. Your accountant will now be sent an email of invitation to your Xero account.

If your accountant needs a higher level of access to your account, then you can edit their permission settings by following this simple process:

Note: If the “Change permissions” option does not appear, then it is likely that your user permissions do not allow you to amend other users’ permissions.

How do I remove my Accountant from my Xero Account?

There may, on occasion, be a need for you to prevent your accountant from accessing your Xero account data. The most obvious circumstance would be when you change over to a new accountant and you want to ensure that your previous accountant no longer has access to your data.

Here is how you delete your accountant (or any other user) from your Xero account:

Note: If the “Delete (Username)” option does not appear, then it is likely that your user permissions do not allow you to delete other users.

Want to work even closer on Xero with your accountant?

Our Xero addon, called Xenon Connect, helps you to make sense of your financial data in Xero as well as detecting and cleaning up bookkeeping issues.

Invite your accountant to access your Xenon Connect account so that you can work collaboratively in real time on your bookkeeping.

For more details, you can sign up for a free trial of Xenon Connect here.

Xenon Connect detects and cleans up bookkeeping errors in Xero and provides powerful financial insight to keep you firmly in control of your business.

How do I record computer expenses in Xero?

There is no one single Xero account code that should be used to record any outgoing that relates to computers. This is because computer expenses

How do I record a customer deposit in Xero?

In this article, we explain how to correctly record the payment of a deposit by a customer, in Xero. Asking customers to pay a deposit

Take a look at our Partner Programme